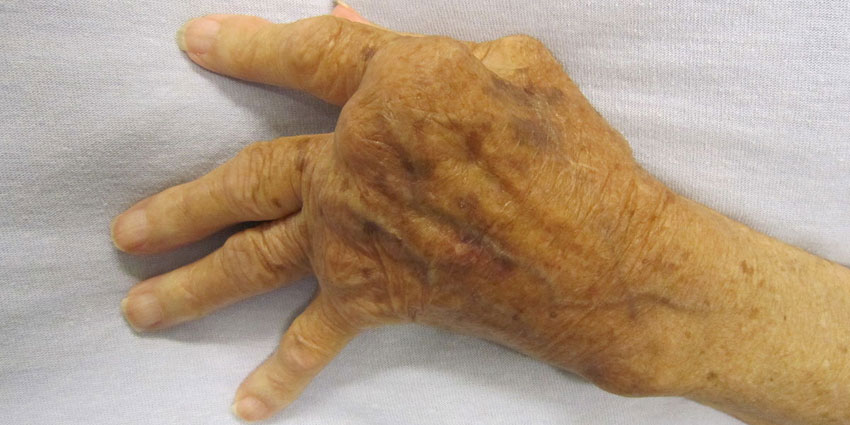 Rheumatoid Arthritis (RA) is a chronic disease characterized by inflamed joints leading to swelling, pain, stiffness, and the possible loss of function. It is an autoimmune disease, which means the body's immune system mistakenly attacks healthy tissues that make up joints. This destroys the joint's protective cartilage, resulting in the bones being rubbed together, causing the pain, swelling, and stiffness associated with this condition.

RA can occur at any age, but is more common in the middle ages. Women are observed to suffer from this disease more often than men. RA usually affects joints on both sides of the body equally. Wrists, fingers, knees, feet, and ankles are the most commonly affected. The disease often begins slowly, usually with only minor joint pain, stiffness, and fatigue. Morning stiffness, which lasts more than 1 hour, is common. Joints may feel warm, tender, and stiff when not used for an hour. Joint pain is often felt on the same joint on both sides of the body. Over time, joints may lose their range of motion and may become deformed.

According to Ayurveda, the physio-chemical and physiological activities inside a human body are governed by the three bio-humors – the tridoshas. These are Vata (from earth and air), Kapha (from water and earth) and Pitta (from fire). The three bio-humors are in a state of dynamic equilibrium in a healthy body. If this equilibrium is vitiated, the person becomes diseased. Thus, Rheumatoid Arthritis is caused by the formation of a toxin called ‘ama’ which is produced by the imbalance of Vata and hence Rheumatoid Arthritis is called Amavata (or Sandhigata vata) in Sanskrit.

“Ama” means unripe, immature and undigested. It is resulted as a consequence of impaired functioning of ‘kayagni’. According to Ayurved; due to the hypo functioning of Agni, the anna-rasa undergoes fermentation and or putrification (dushta). It is this state of Rasa, which is known as ‘Ama’, which circulates in body and accumulates in joints causing Amavata. Ayurveda aims at correcting the balance of the three doshas to achieve a disease-free state. Thus it asks patients to refrain from curds, fish, and milk.